Michael
Origin : Malaysia
Watchmaking class: Technician & Fullskill
Current mood: After drawing on paper and found some limitations to some details for example different planes and overlapping. Also if there is something wrong or have to be edit, everything has to be redrawn and it’s not very time efficient so I decided to try Inventor. Managed to draw an escape wheel after some research and time.
Renato & David
Origin: Zug, Zürich, Switzerland
Watchmaking class: Fullskill
Current mood: This week I worked on creating a winding stem. Did some testing of heat treatment and winding stem bending in order to get ready for my winding stem exam. David
Francesco, Åsmund & Robert
Origin: Italy, Norway, USA
Watchmaking class: Fullskill
Current mood:
Hello everyone, this week I started the restoration project. First of all I started with the profile projector, I drew the piece and then I measured all the dimensions. I’ve chosen to start with a brass prototype and see if it works properly, but suddenly I figured that we don’t have the right die. We have the normal pitch but I need the thin one. So I have to wait until I get the right one.
After that I started filing my last tool, the brass wheel truing guide and the steel angular ruler.
See you next weekend,
Francesco
Hello,
Two weeks left until Christmas, so our school admin decided that we would make Christmas cookies this Thursday. That was a fun day and got me in the Christmas mood. Now we have cookies for weeks🎄
Last Sunday our teacher Henrik did some trials for finishing a wheel and that caught my interest as I have a few wheels that was in need for finishing. So I went on to make different supports and cutters, first I tested the classic method with shellac to hold the wheel, but I wanted something less messy, so I went on to try double sided tape which worked good. But I had an idea that a screw would be the ultimate as you don’t need to spend time with cleaning, changing tape or centering the wheel. Some time went into planning how I would do it, so the wheels would always be centered and also so the cutter could reach the middle section when doing the finishing. Tried different ways of snailing and sunray finishing and it turned out good, but I’m not at the point where I am satisfied yet, so I’m probably gonna spend the weekend doing some trial and error. Other than that I still need to finish the tripod and deliver it to Henrik for evaluation so I can start doing some black polish again, because that is so satisfying!!
Head over to our Instagram to see the results for the wheel I finished(keep in mind that it’s one of the first trials I did).
Have a great weekend.
-Å
STEP 1:  FINISHING! (ÅSMUND) 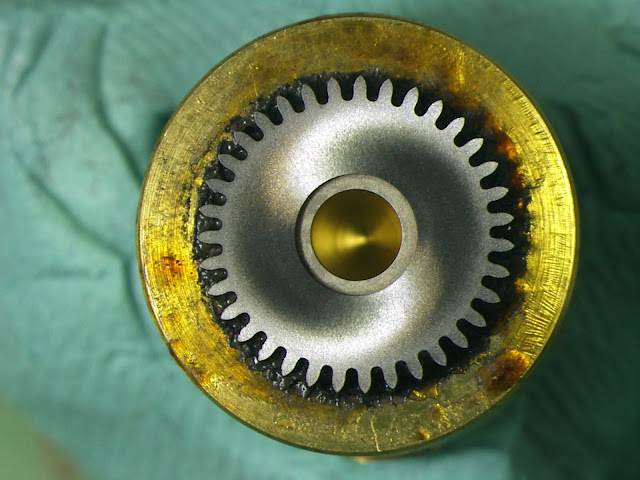 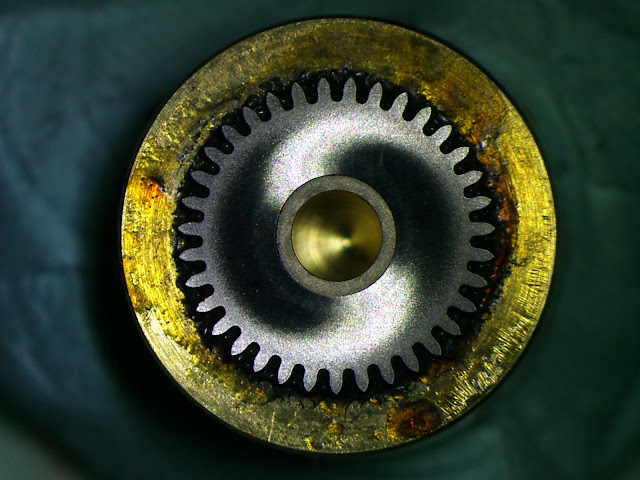 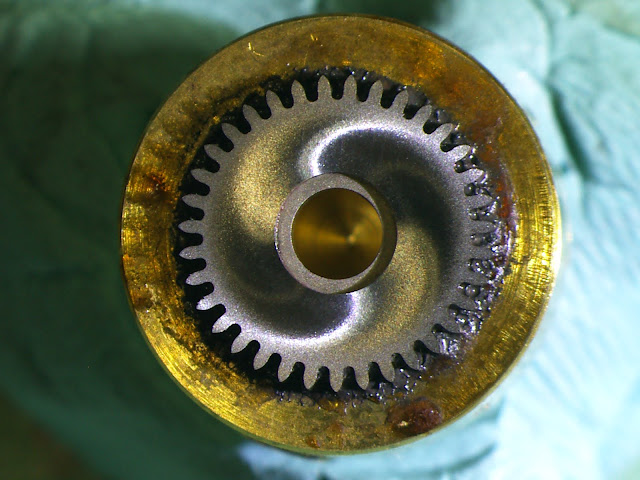 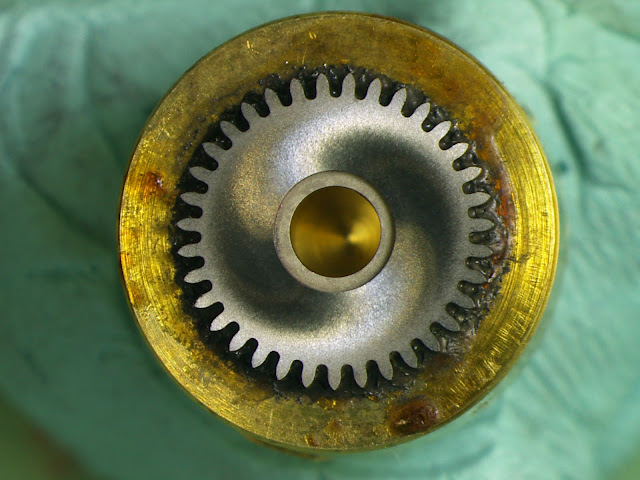 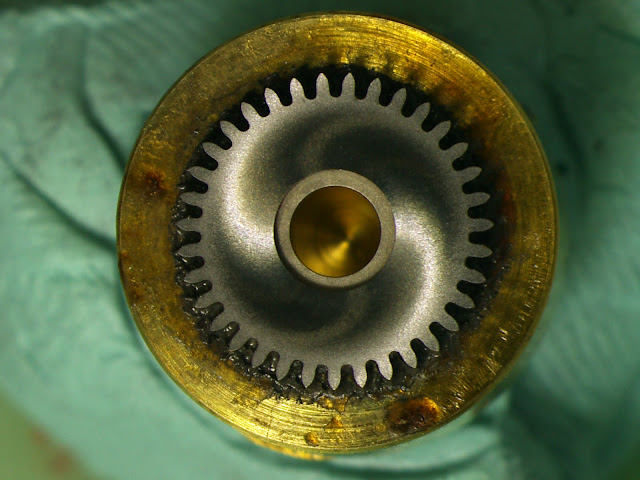 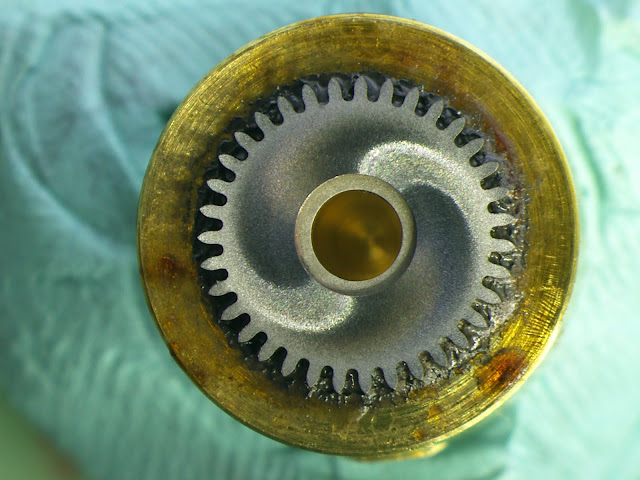 Asmund practiced finishing ratchet and crown wheels, this is one of the practice wheels, the pictures above is the same wheel but under different lighting conditions! 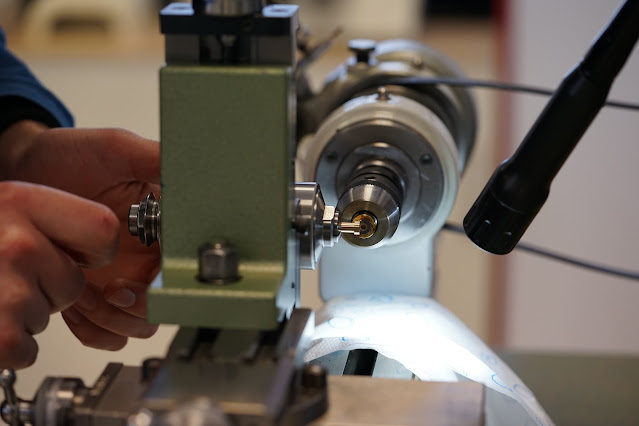 Asmund setting up lathe with milling head to finish crown and ratchet wheels!
STEP 2:  COOKIES! (EVERYONE) 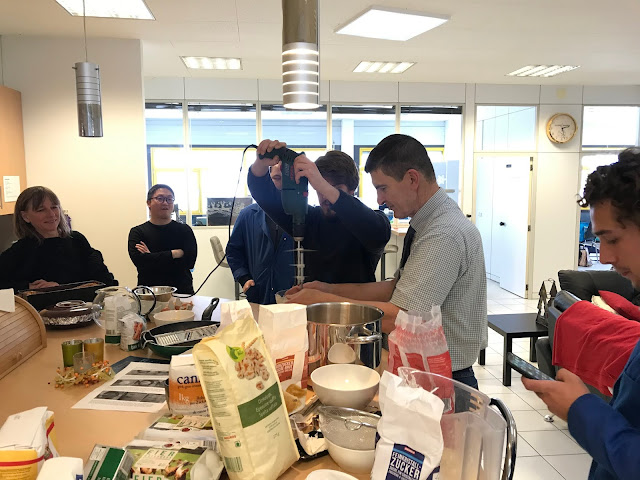 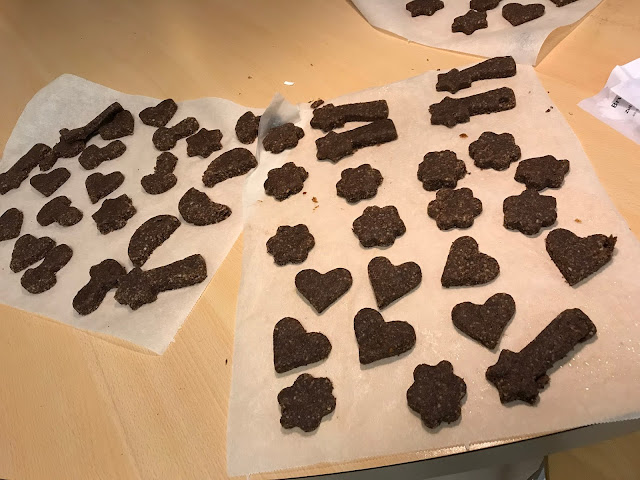 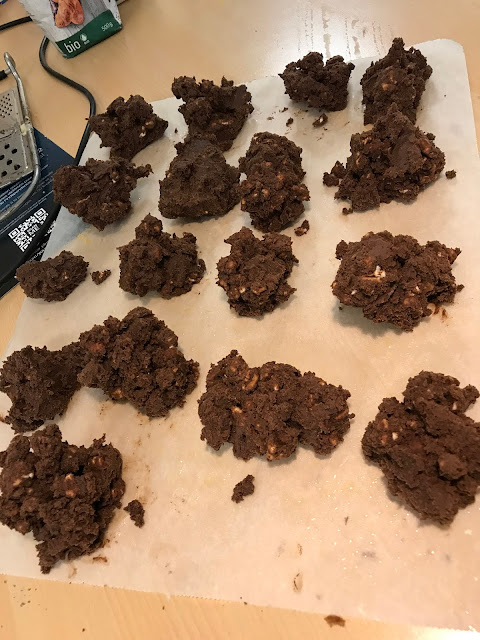 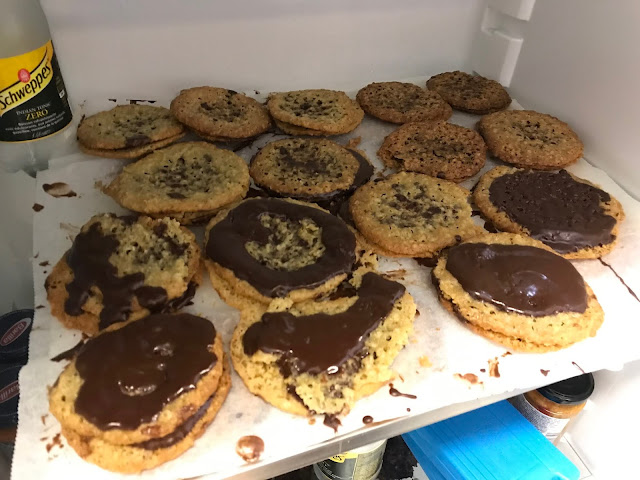 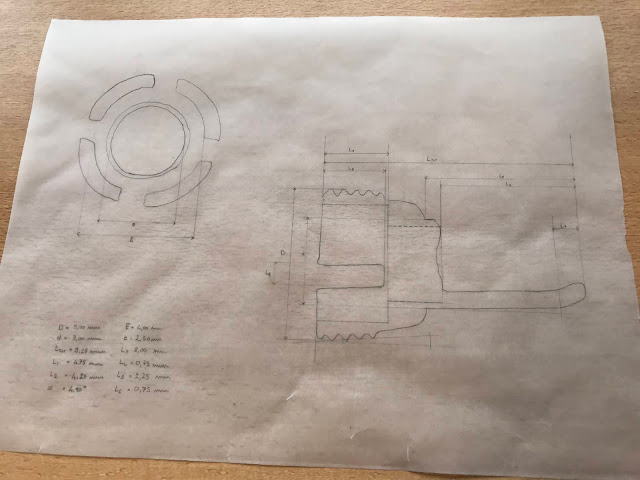 Francesco used the profile projector to draw the original broken case tube before making a prototype for his restoration project! He then found out that unfortunately we have to make an order on a special cutting die as the pitch did not correspond to the normal metric ones we use in the school.
STEP 4:  BOOKS! (KHWCC LIBRARY) 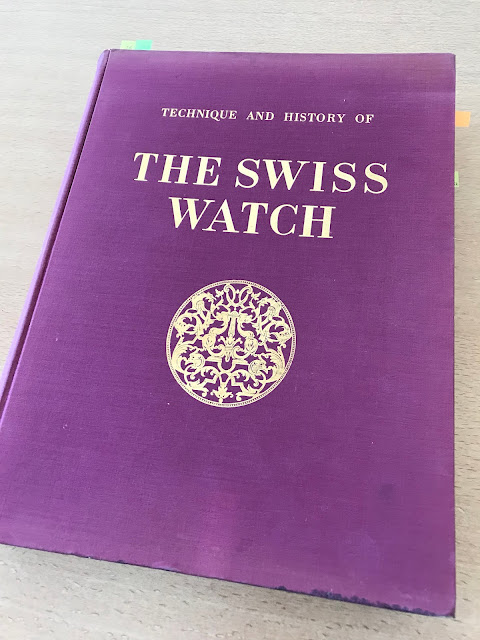 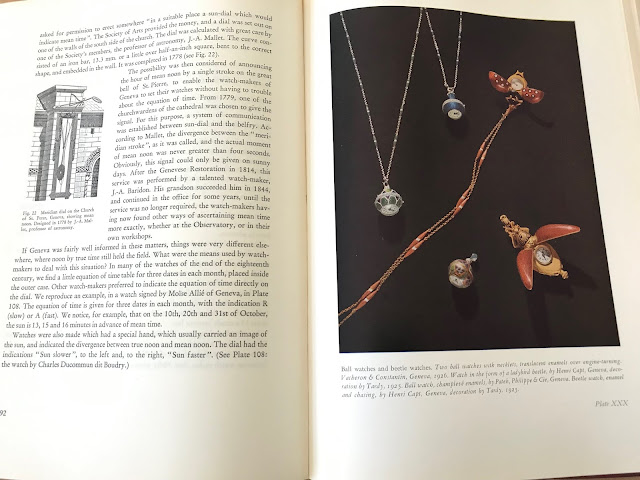 If you are interested in the history of the Swiss watch this is a good first book to start with! 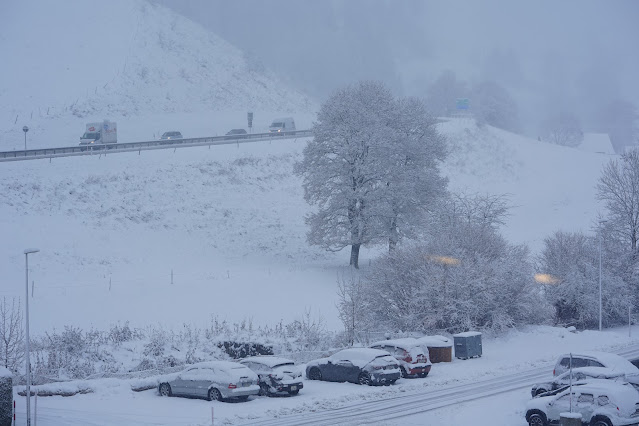 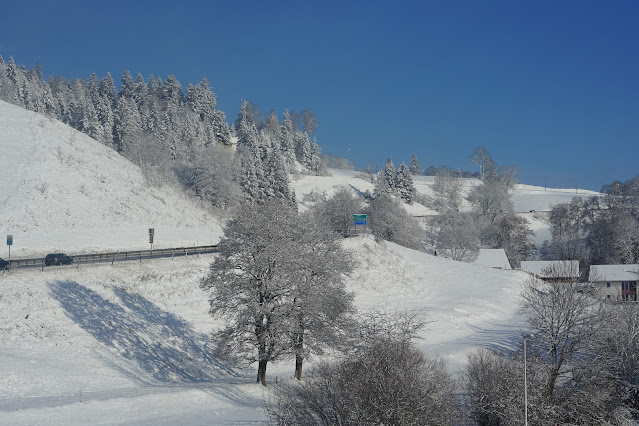 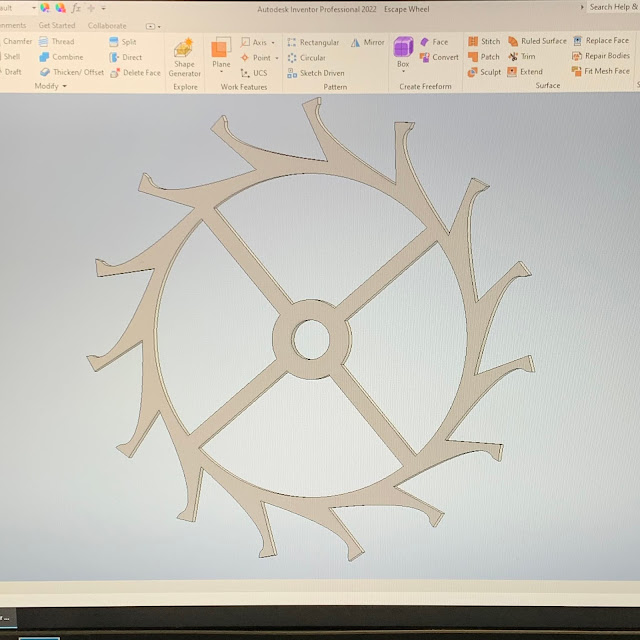 Michael tried out drawing with the inventor program.

As forecasted we did get plenty of snow and this time it sticks around as the temperature got lower! Nothing much new this week except Asmund tried out grinding a snailed finish on ratchet and crown wheels. As we have not done anything together for sometime we decided to try to make our own cookies as many of us have it for the coffee break anyway, I think we got enough cookies to last us until next year probably! David continued practicing making winding stems, Asmund, Francesco and Robert continued with their tools and Michael continued designing parts for his school watch project but now with the computer program Inventor from Autodesk! It was a nice week in general! Have a great weekend everyone!