Team A
Origin: Thailand & USA,
Name: A, Kate, David & Leilani
Watchmaking class: Technician
Current mood:
The technicians are in their last two weeks of school. Time has really flown by! Recent lectures and demonstrations by Henrik have included the proper way to place and align watch hands and how to measure and fit a new winding stem to the crown.The winding stem usually inserts through a tube in the case of the watch. We learned the technique to remove and place these tubes.
We had a visit with the legendary Antoine Simonin at his bookstore!
We are in the middle of final exams at the moment and everyone is laser focused. Its been great ride.The light at the end of the tunnel is getting stronger…
David C.
Team B
Origin: Japan/Switzerland & Canada
Name: Tetsu & Dean
Watchmaking class: Fullskill
Current mood:
This week, (29 August~02 September) Dean & Tetsu continued producing winding stems, including square filing by hand and thread cutting before going into heat treatment.
It was hard enough for them just to turn the shape from φ 2.0 mm steel wire, as they needed a whole day to produce one at the beginning of the week.  Now, it was almost coming to two pieces a day when everything went well.
After many mistakes, their successful rates were slowly climbing up, but risks of ruining the pieces were always present.
So their next aim will be “getting better quality while keeping the speed!”
Making the shape is one thing, they will need to face some more hurdles; such as heat treatment, slot cutting and surface finishing…
Still a long way to go.
We wish you all a nice weekend!
Dean & Tetsu
Team C
Origin: Switzerland, Norway & USA
Name: Renato, David, Francesco, Åsmund & Robert
Watchmaking class: Fullskill
Current mood:
Went back to some restoration work after the last exam. The split second pocket watch movement I am restoring had two damaged teeth on the barrel. Since we want to keep as much as possible original in a restoration, I used the old technique of removing the damaged section and creating a dovetail shaped cutout. Then a fitting counterpart had to be filed from 3mm material. A lot of sawing and hand filing to be done here on a fairly small scale. Nice exercise! Afterwards the piece is soldered into place and all excess material is removed. I did latter in the jig borer, which worked out fine. Next week I need to clean up the barrel and hand file the teeth. That will be interesting!
-Renato
Hello,
This week has been quite busy with trial exam for pivot gauge yesterday and hour wheel today. We had a walkthrough of the hour wheel with Henrik on Wednesday and he showed us how to do it the classical way which were really fun.
It is very satisfying being able to make a wheel out of a brass bar and refining it down to a finished, working wheel which you can put directly into the movement. Head over to our school Instagram to see the parting off process.
-Å
The pivot gauge work continues this week. These are a challenging task: As I was using some paper to clean some measuring surfaces, I realized some of the smaller pivot gauges would be smaller in diameter than the paper is thick. Of early this week we also got introduced to wheel cutting.
-Robert
STEP 1: BALANCE STAFF! (FRANCESCO) 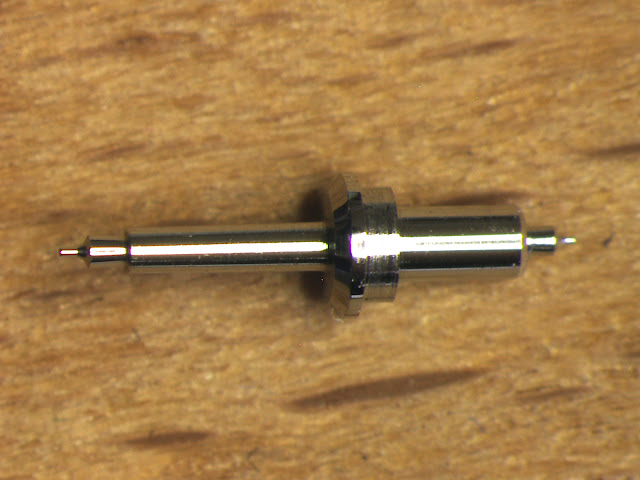 Francesco completed his second balance staff, this one was for the English pocket watch! 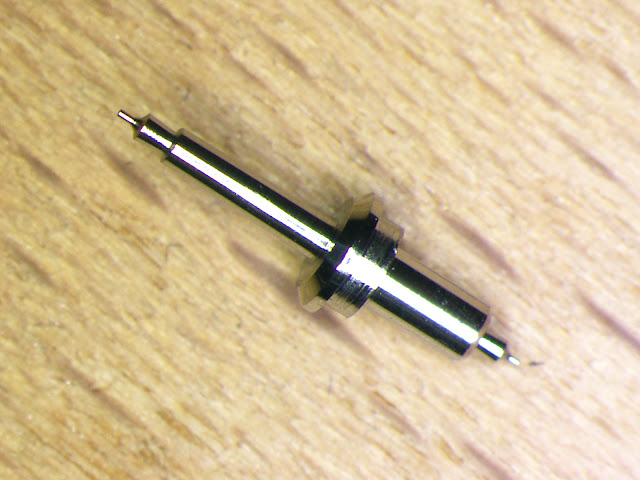 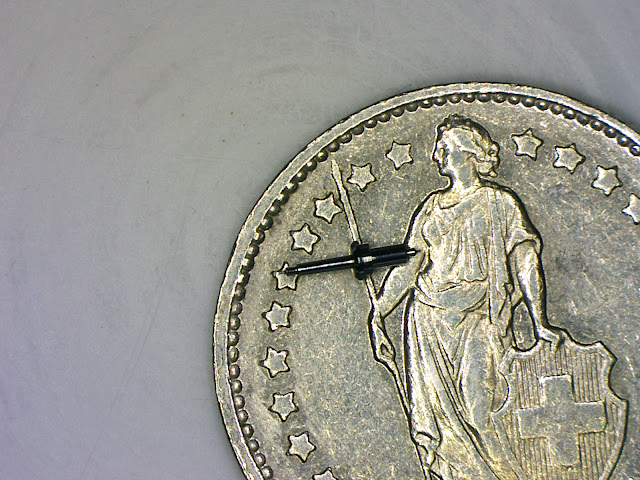 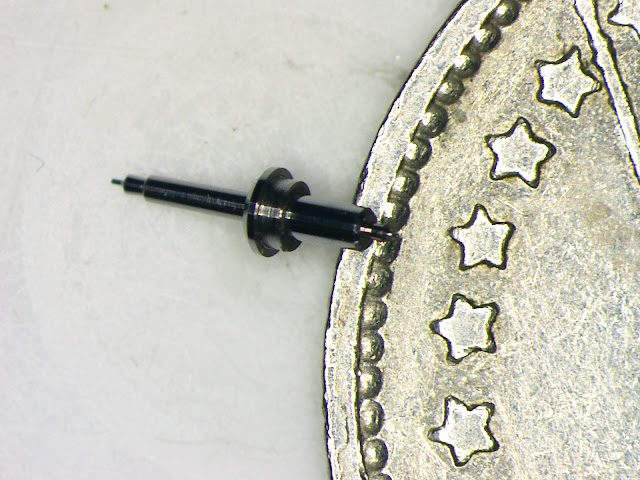 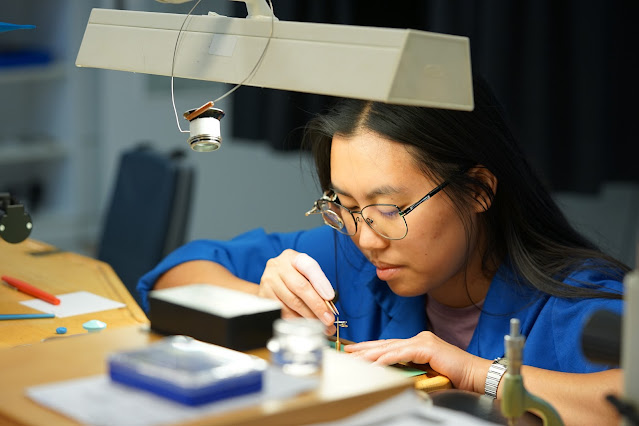 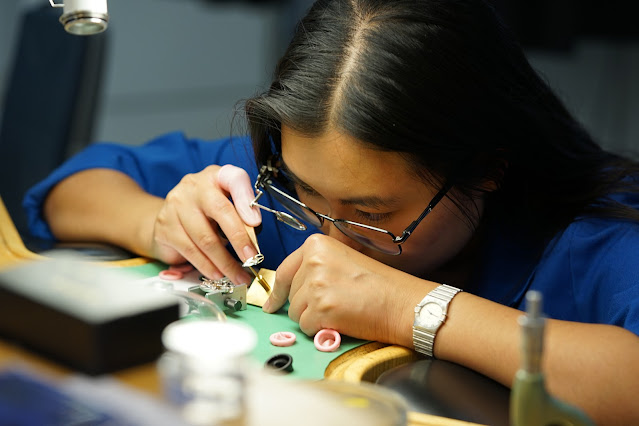 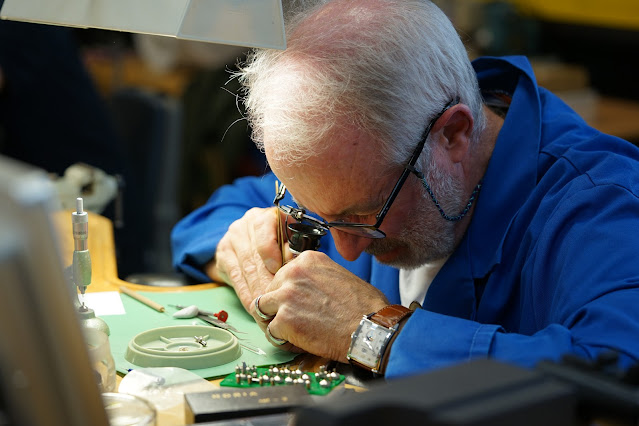 Technicians working hard in preparation for their final exam! 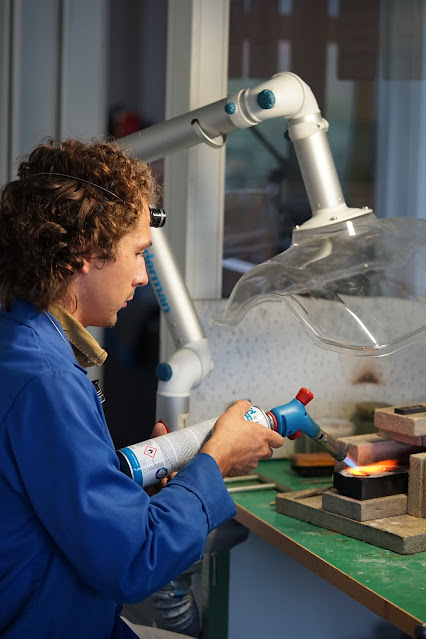 Francesco running some trials for his school watch! 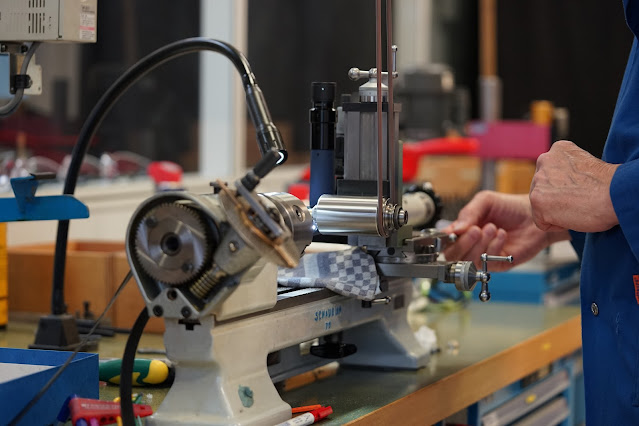 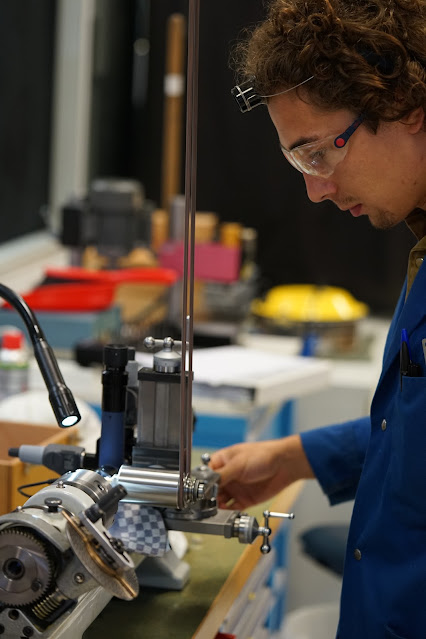 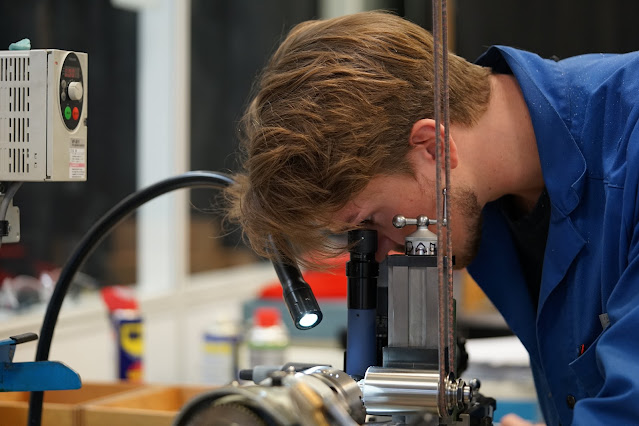 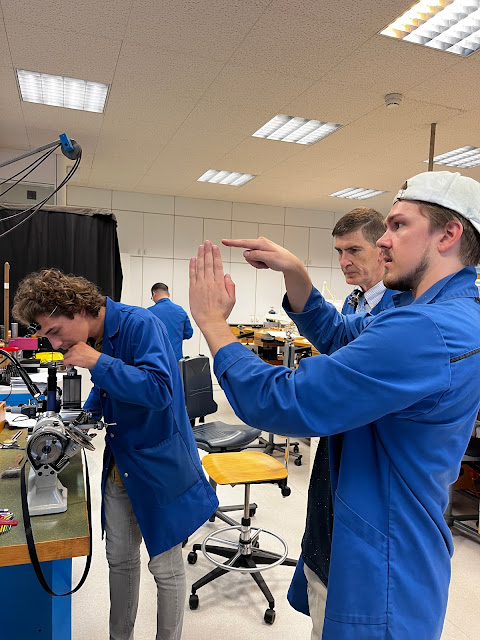 Discussing something about wheel and pinion making! 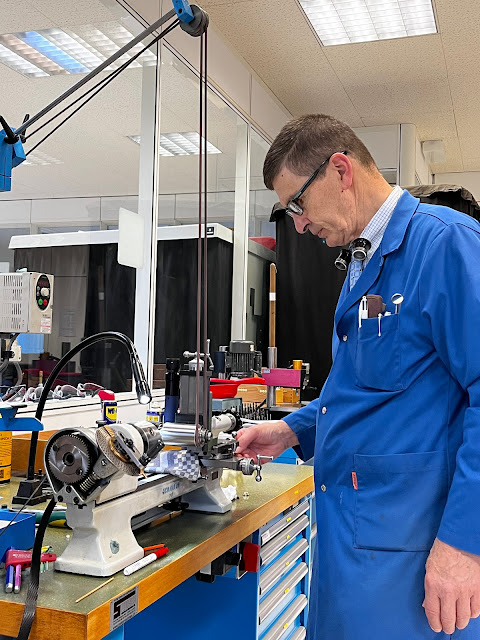 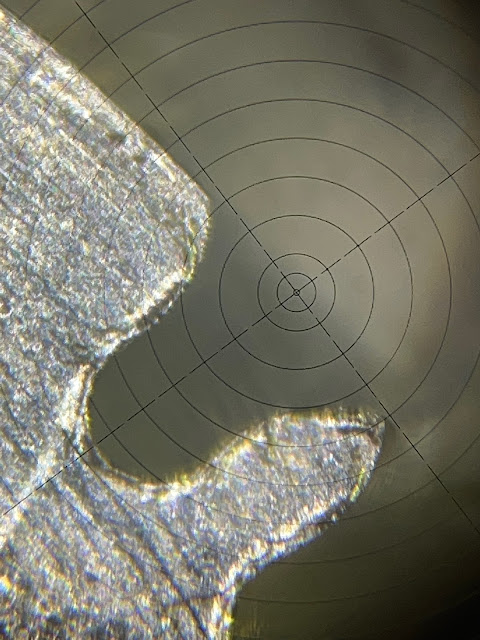 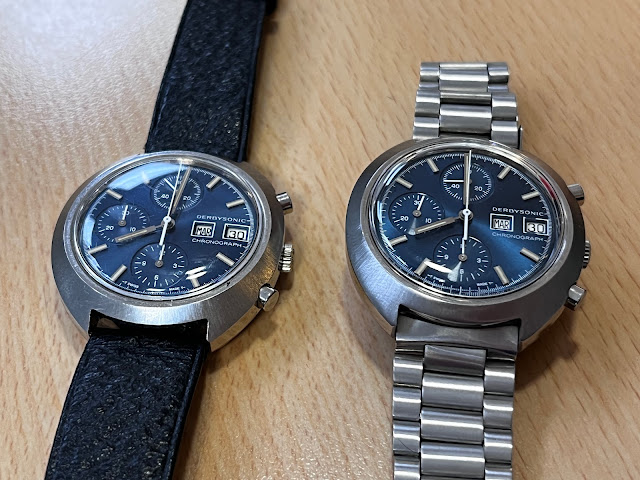 Showdown between Derbysonics, which one is best :) 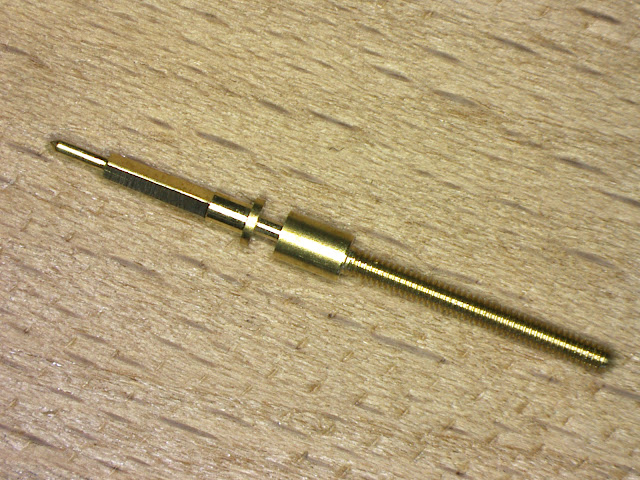 Tetsu made this nice brass winding stem prototype some time ago! 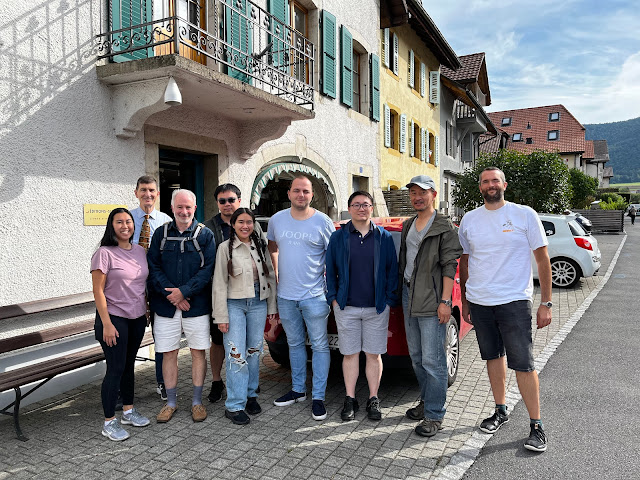 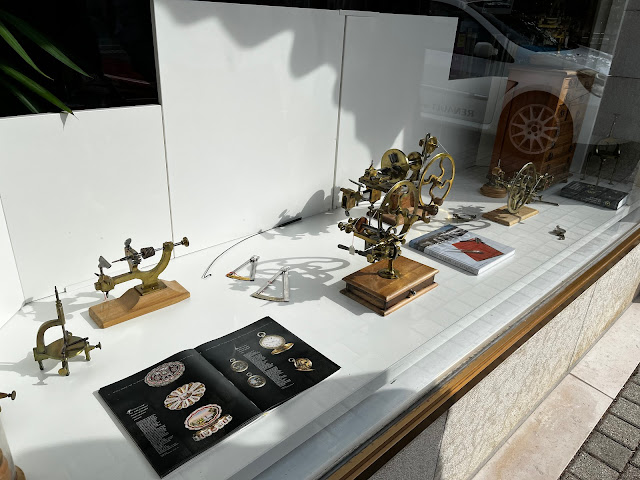 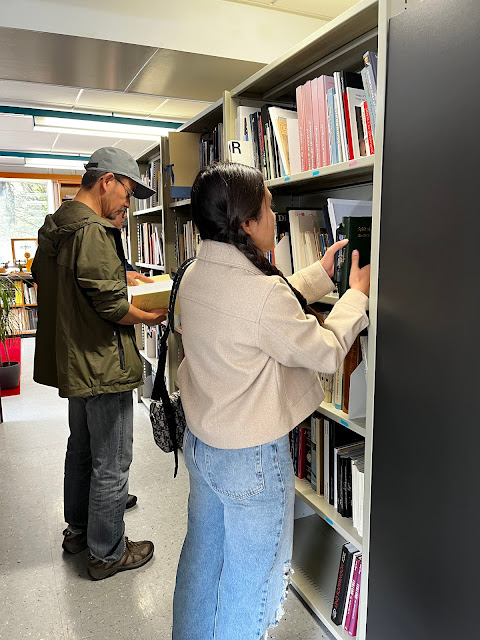 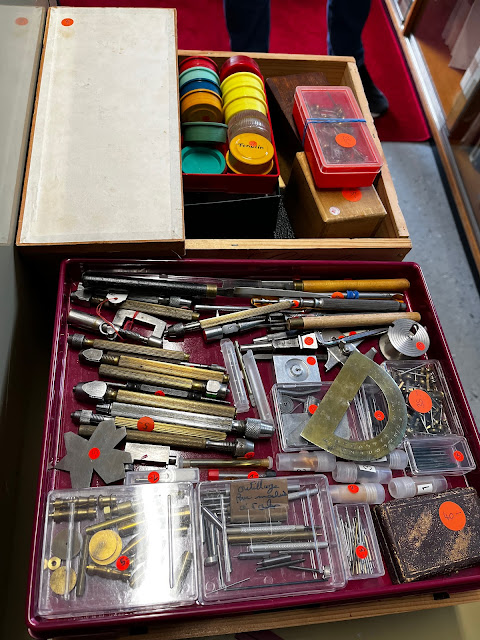 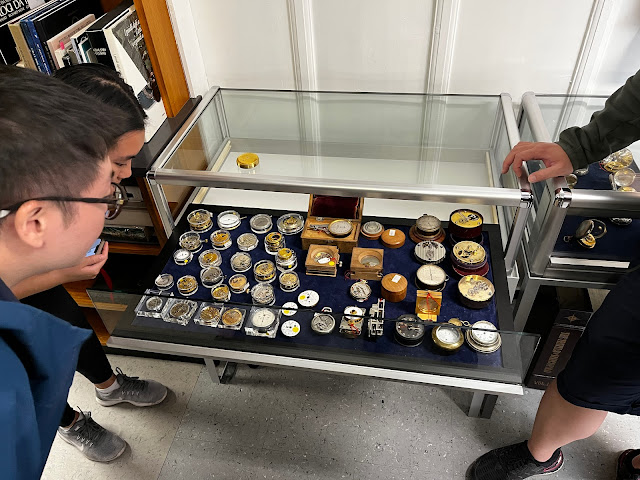 We had a great visit last week to Mr. Simonin, it was really enjoyable and we have not had the chance for a long time! Looking forward to the next time!

This week was really fast! The technicians are in the final exam as I write, wish them good luck! Dean and Tetsu got some winding stems bent after heat treatment and learn how to rectify them as well as continue to make more winding stems in order to get ready for the exam. David and Renato completed the gear train course. Robert Asmund & Francesco learn how to make wheels with the Schaublin 70 lathe! Another very busy but enjoyable week!! Have a great weekend everyone!