Origin: Sweden, The Philippines & Taiwan
Name: Daniel, Miguel, & David
Watchmaking class: Fullskill
Current mood:
This week we learned how to use the milling attachment for the lathe, we used the milling machine to practice the brass anvil and make our polishing tripod.Me and David made the balance bridge holder and Daniel started working on his pointed nose hand vise.I also made a practice piece with the different divisions of the milling attachment on a single brass bar.
-Miguel

This week, (16~20 January) Dean & Tetsu continued their current tasks: Disassembly, cleaning, oiling, and assembly of Incabloc settings, in addition to the winding & setting mechanisms of the mandatory seven movements.

Dean worked on refreshing his skills, which he gained from previous years, by applying what he learned in school so far to strengthen his abilities. He also registered some of his watches for repair points, and has already almost finished one of them.

It was a bit different for Tetsu as he has no previous experience. Everything he learns this year would be entirely new. He took his time to first get accustomed to handling tweezers and screwdrivers. Then, he tried to understand how to work on the watch components. It would not be easy at the beginning, but he needs to go through step by step. There will be no shortcuts for this one.

On Thursday, Henrik gave them a lecture, explaining the construction of different types of barrels and how to service those, and the guys have already started this new task.

No time to stop!

We wish you all a nice weekend!

Team C
Origin: Switzerland, Norway & USA
Name: Renato, David, Francesco, Åsmund & Robert
Watchmaking class: Fullskill
Current mood:
Overview: This week was an introduction to the pallet fork and balance wheel of the Swiss lever escapement. We worked on our school movements to find and correct any introduced faults on those new parts of our studies. (Pallet stones in reversed positions, the odd little things like that...)
In addition, we each worked on a different version of a tool that is used to hold a pallet fork on a heater so shellac could be applied to secure the pallet stones in the pallet.
Local news: It's hovering around 0°C day and night, the snow we got should last for 4 or 5 more days.
-Robert
David and I reached the final steps before the hairspring exam: studding up the hairspring on the balance bridge, forming the regulating curve and double bend, centering and flattening everything nicely in all directions. Very interesting to slowly get the feel for the hairspring manipulations and which tools to use for each operation. Next and last step before the exam will be the timing, beginning of next week. Also we'll start the practice exams then. Quite a demanding exam with very many process steps!
-Renato

Origin: Finland
Name: Xinying
Watchmaking class: Technician
Current mood:
This week I had some theory about divisions and endshakes from escapement wheel to balance. Spent most of the week practicing it in movements. Feeling that I am starting have more routine in doing things and feeling more comfortable with movements. Overall a nice week.
Xinying
STEP 1: MACHINING! (DANIEL,DAVID & MIGUEL) 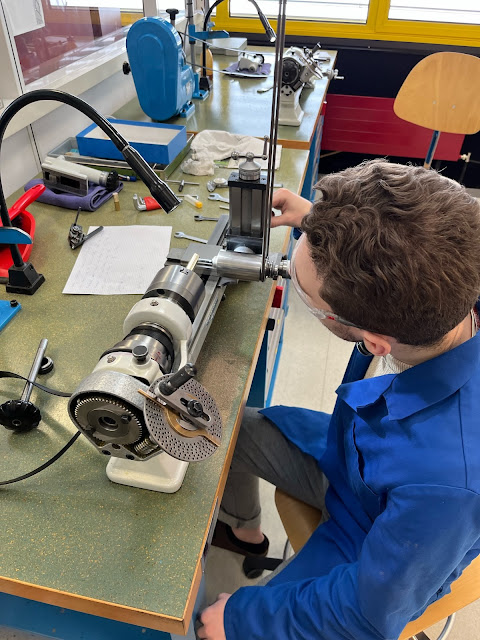 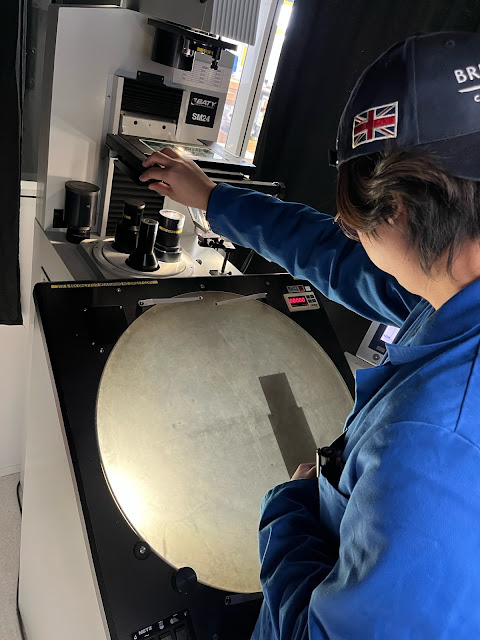 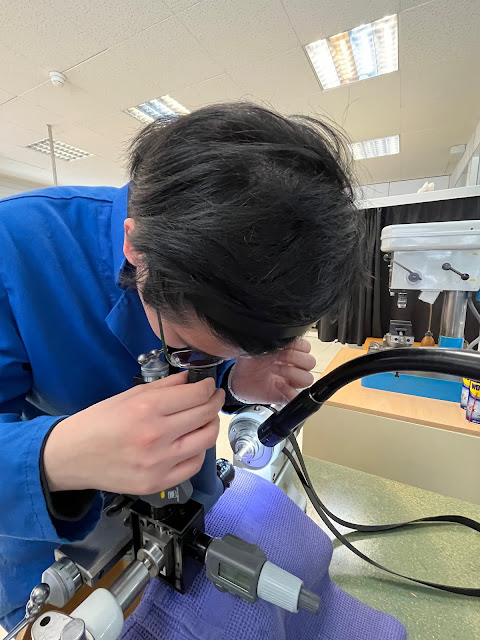 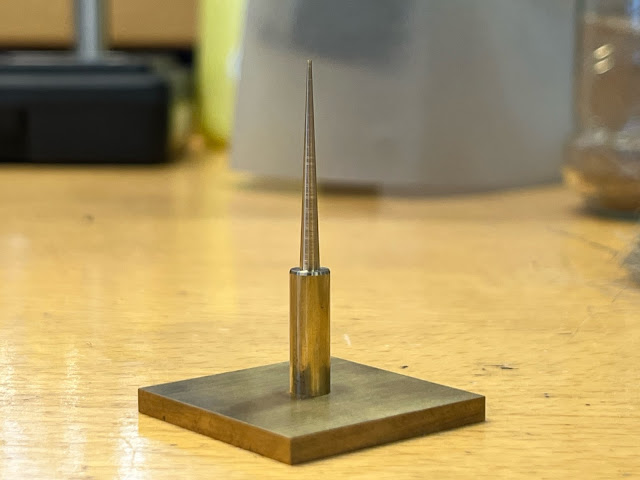 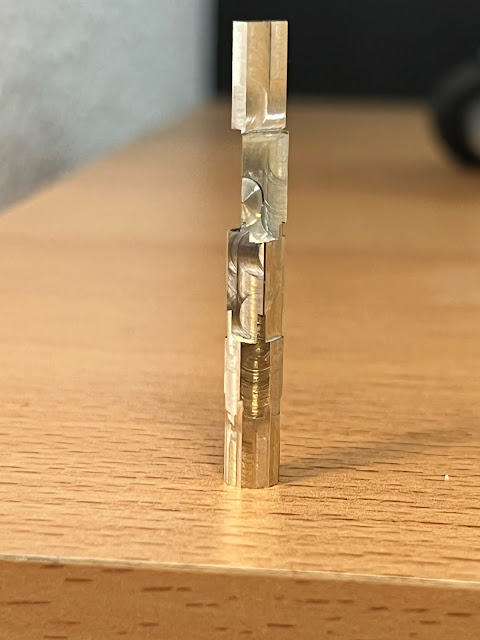 Lots of machine practice this week! 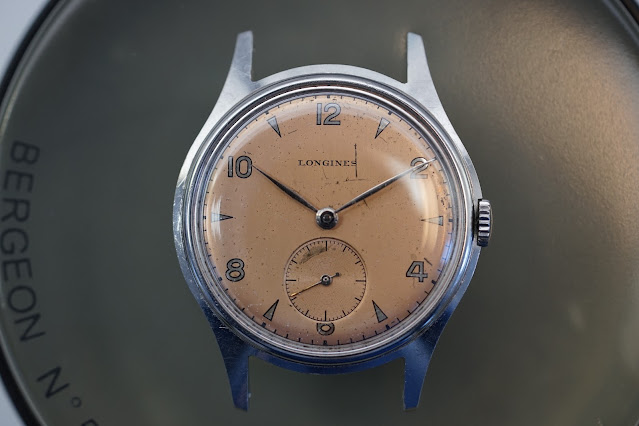 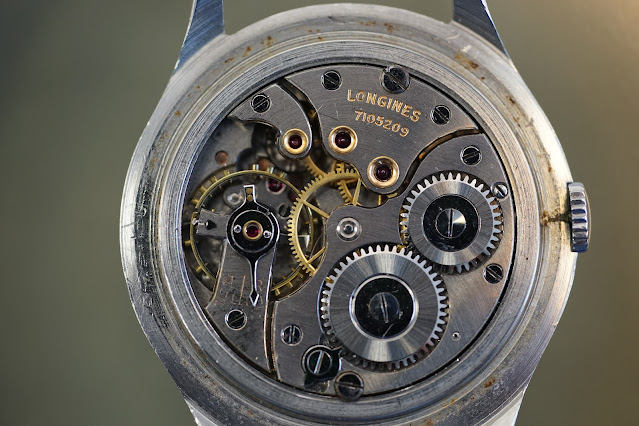 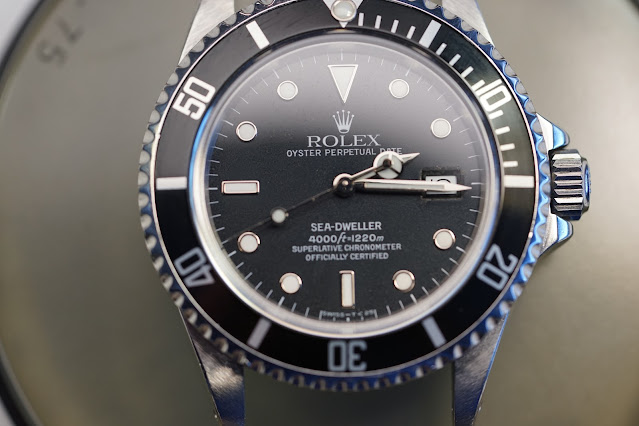 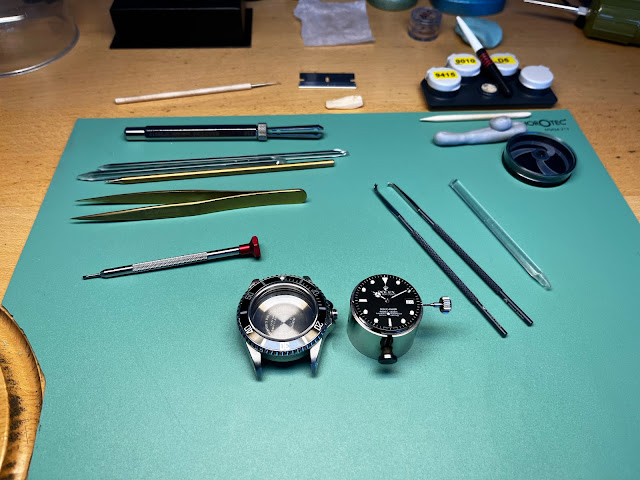 Dean got some watches for overhaul! 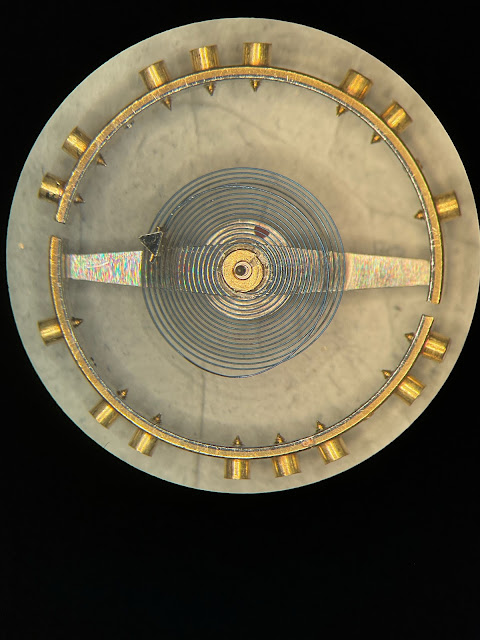 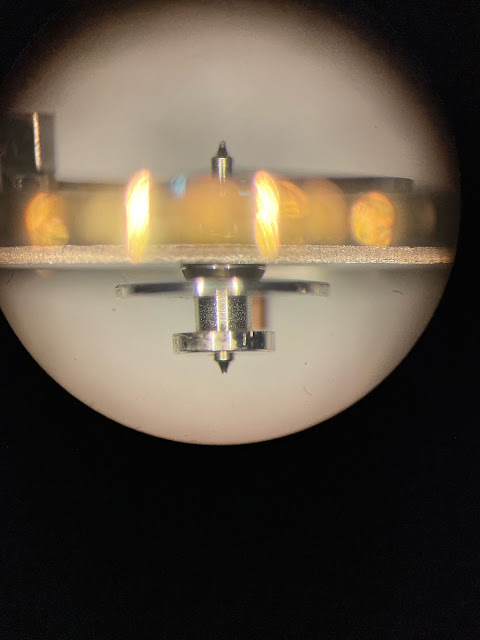 Dean found a broken balance staff, he will later replace it or make a new one! 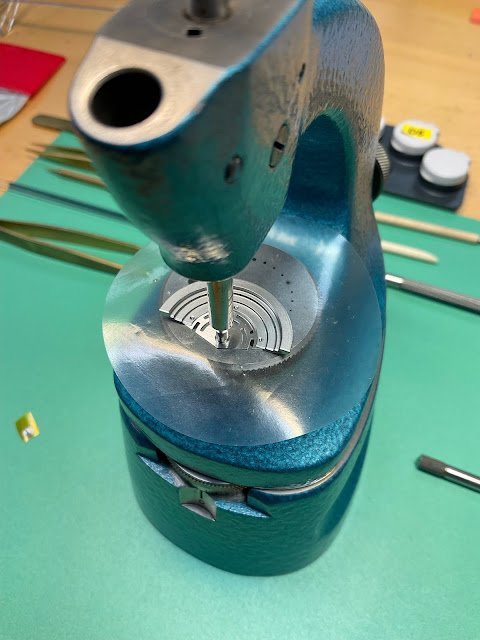 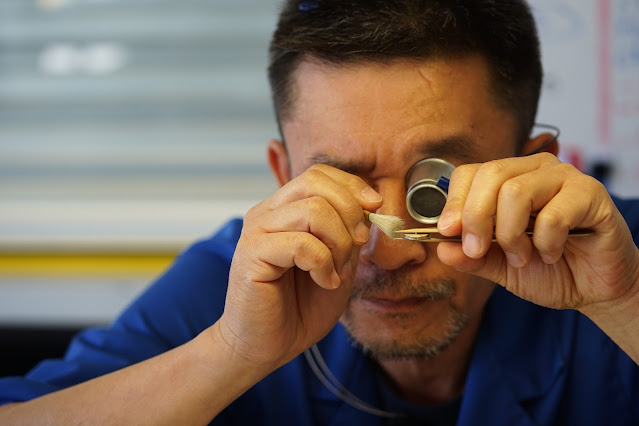 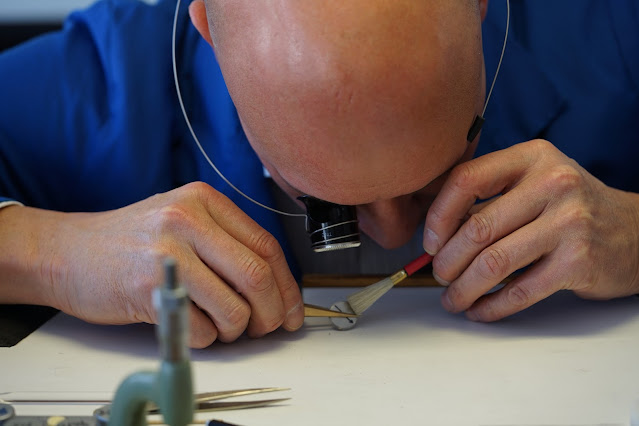 Tetsu and Dean started to practice restoration and service of mainspring barrels, here they are learning to inspect a barrel with damaged bearings that runs unflat! Xin donated these books to the school library. Thank you Xin! 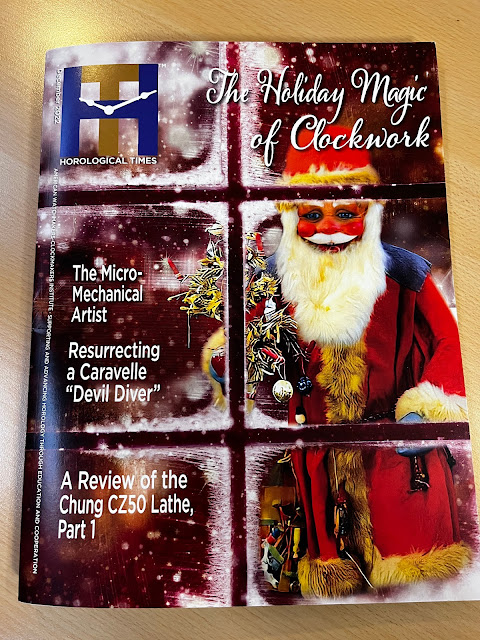 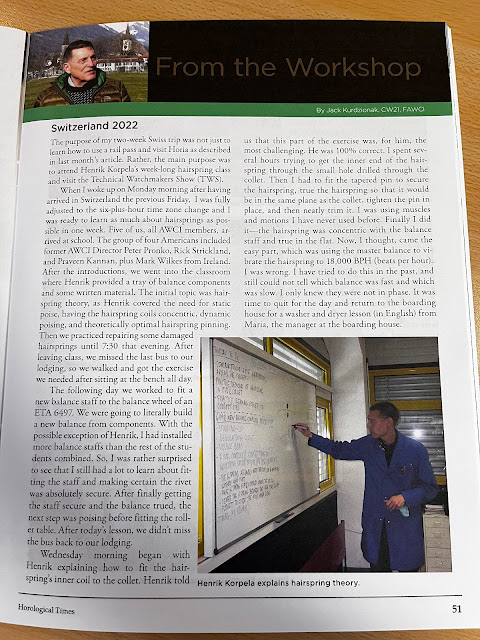 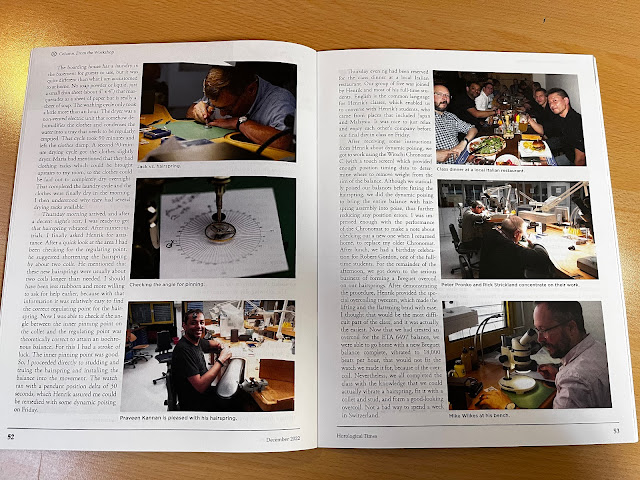 Thank you for featuring us in the Horological Times Jack!

HENRIK's WORDS:
It got really cold some days this week around -10°C with lots of additional snow fall, in the neighbouring town just 10 minutes away they got as low as -21°C! now on Friday it got a bit milder and its back at around 0°C! Francesco, Asmund, Robert and Xin continued with the escapement course doing endshakes and divisions, Daniel, David and Miguel continued practicing machining! Renato and David L. have reached the end of the hairspring course and will soon begin to practice for the exam! Tetsu and Dean got introduced to mainsprings and barrels, the energy accumulator of a mechanical watch! We also got featured in the Horological Times of AWCI, thank you Jack!! It was a really crisp and great week! Have a nice weekend everyone!
at 8:41 AM