The Franc is the Hulk but big muscles don't mean it has big powers .. 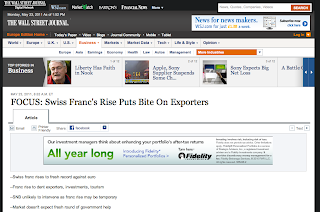 There are no Economists in the school but this surely doesn't bode well for the future.
And why not ?
You could read the article by clicking here or scrolling down.
Or i'll spell it out for you.
1. A strong Swiss Franc means anyone wanting to buy Swiss products outside of Switzerland will need to pay more. Asia and other developing countries have "booming" economies so they say but profits are profits. A more expensive Swiss Francs means they will buy less. Not a good sign for anyone at all.
2. When it comes to luxury products like watches, people will be more selective in their buying. In other words, people will buy safer products. This might not be a good thing for the rest of us who are starting out or want to venture out as an independent. But then again, it could swing both ways. Because people have less to spend, they might choose to buy handmade because handmade things don't lose their value easily. Lets all keep our fingers cross.
3. Students thinking of coming to Switzerland to learn about watchmaking might reconsider their position and stay put in their current jobs because the Swiss Franc has seriously dented their budgets.
But its not all doom. Here's the best bits.
1. For the number of us who are based in Switzerland, now is the best time to buy 2nd hand quality equipment from outside Switzerland to boost your workshop ! Great value even with the shipping charges !
2. Parts and supplies which we order from out of Switzerland are going to be alot more cheaper if we pay in Francs to the supplier. We change less francs for more USD, GBP, RMB, YEN etc etc etc
But the stark reality is probably that Swiss exports will lessen. So we might want to brace ourselves for the impact. Of course, lets hope for the best but its also wise to be cautious and prepare ourselves just in case.
*This entry does not constitute economic/financial advice. This is a purely personal view and may not accurately reflect real market conditions . We will not be responsible for any losses resulting from the views expressed in this blog entry.
The article excerpt is reproduced below.
[ Extracted from http://online.wsj.com/article/BT-CO-20110523-706591.html ]

ZURICH (Dow Jones)--The Swiss franc's latest rise against the euro is set to deepen the problems of the country's exporters and tourism industry but is unlikely to prompt the central bank to intervene in the currency markets just yet, industry experts and analysts say.

The franc rose sharply against the euro on Monday amid renewed concerns that Greece might have to restructure its debt after rating agency Fitch downgraded the country's credit rating on Friday. These debt fears were intensified as Standard & Poor's also cut Italy's credit outlook and Spain's ruling party lost local elections over the weekend.

The euro traded at 1.2369 Swiss francs Monday afternoon after hitting a new record low of CHF1.2323 in the morning, extending Friday's losses. The franc's unabated rise triggered speculation that the Swiss National Bank might step in to avert a further strengthening, which is set to hit the country's export industry.

The SNB declined to comment on the market speculation and traders said that any such move is unlikely in the short term after the central bank's past currency interventions left it saddled with huge losses, triggering widespread political criticism and calls from Switzerland's right-wing party SVP for stricter oversight of the independent body.

"From a political point of view, the SNB's hands are tied after they were heavily criticized for their past interventions and so fresh interventions are very unlikely," said Damian Zihlmann, trader at Quaesta Capital. "What is possible, though, is that the SNB will intervene verbally once the euro falls to a level of 1.200 francs, which may be a pain threshold."

Other traders expect the SNB to move in sooner. "If the euro slips below 1.2200 against the franc, then the SNB could make its presence felt," said Roland Raczek, a trader at BayernLB. "The market is very nervous at the moment, but what will concern the SNB most is the speed of the euro's drop against the franc."

Anja Hochberg, head of investment strategy at Credit Suisse, doubts the SNB will have to intervene because she expects the franc's ascent to be short-lived. "But the current franc strength makes it is unlikely that the central bank will raise interest rates at its next meeting," she said.

The SNB will hold a policy meeting in June and is expected to keep rates on hold because of the franc's current strength. The bank has kept the target for the key three-month Swiss franc London interbank offered rate at 0.25% since March 2009.

Swiss exporters have for months complained about their currency's strength, which curtails the ability of many companies to be competitive in Europe and the U.S. The franc's recent rise against the dollar has worsened the outlook for many exporters, who over the past few months had spread out activity in dollar-denominated economies to limit the damage of the weak euro.

"The situation has become more accentuated, also because the dollar's recent weakness hurts profit margins," said Ivo Zimmermann, spokesman for industry group Swissmem, which represents around 1,000 companies in the Swiss mechanical and electrical engineering industries. The group's members export goods worth some CHF63 billion ($71.4 billion) and contribute some 35% to the country's exports.

"Many companies have already started to implement measures against the strong franc," Zimmermann said. "But the renewed rise could prompt some companies to cut jobs or move investments out of Switzerland." Swissmem's members employ some 330,000 people.

Zimmermann added the Swiss government needs to safeguard the country's ability to remain innovative and continue to support the knowledge transfer between universities and businesses. Also, the government should fight calls to curb the free movement of persons because Switzerland needs highly-skilled workers to stay competitive, he said.

Economists and business executives, meanwhile, don't expect government support to intensify after Swiss Economy Minister Johann Schneider-Ammann last week said the government's means to limit the upward pressure of the franc were limited and that Swiss companies need to learn to live with a strong currency.

Peter Spuhler, chief executive of Swiss railway vehicle maker Stalder Rail AG, criticized this approach but said companies need to adapt to the new reality. "We have to go through this now," Spuhler said last week at a business event in Interlaken.

At the meeting, a majority of businessmen complained about the franc's strength but noted that Switzerland can only remain competitive if the country continues to spur innovation and attract managers and skilled workers from other countries, something the country has done successfully over the past decade.

Meanwhile, the Swiss tourism industry, which was among the hardest-hit sectors and received government assistance earlier this year, is set to continue to suffer as the franc remains strong. According to a survey by the BAK Basel Economics institute, bookings at Swiss hotels will decline an annual 1.3% in the period from May to October thanks to a 2.6% slide in foreign demand, particularly from Europe and Japan. Analysts are concerned that the recent franc rise could accelerate the decline.